The Turtle Islands Park lies 40 km north of Sandakan.The park comprises three small islands, Selingan, Gulisan and Bakungan Kechil. It covers an area of 1,740 hectares which includes the surrounding reefs and seas. Two species of turtles - Greens and Hawksbills are special features of this park. Throughout the year, they come ashore at night to lay their eggs. Hatcheries exist on all three islands. Sea Turtles are not the only attraction of the islands. The clear turquoise coloured sea and coral reefs are ideal for swimming, snorkelling and scuba diving. When the fruit trees are in season, the islands have another interesting visitor - the Island Flying Fox. The islands became a marine park in 1977. Staff are resident on all three islands to safeguard the park. 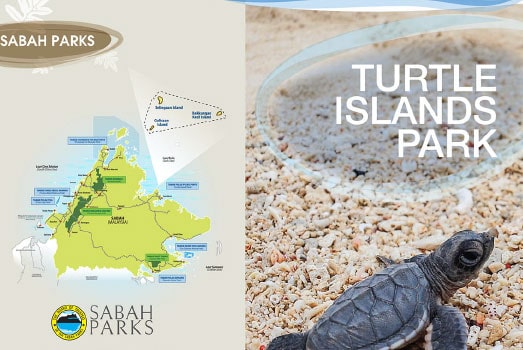 Pulau Gulisan is only 1.6 hectares in size and is the smallest of the three islands. Much of the land has eroded away leaving only the central portion still under vegetation. Hawksbills prefer to lay their eggs on Pulau Gulisan where the type of beach and vegetation are particularly favourable. The hatchery is well shaded by the trees growing around it.

The largest of the three islands is Pulau Bakkungan Kechil. This 8.5 hectares island is the nearest to the Philippines border.The island has a wide promontory to the southeast. In the centre of the island there is a hill where mud volcanoes are still active and bubbling mud and water ooze out from it. The northern and western beaches are favoured by the Green turtles.